Natural Gas Drilling in the Marcellus Shale and Barnett Shale Has Been Made Possible Through Directional Drilling and Fracking.

Natural gas drilling is the only known method to extract natural gas - a non-renewable natural resource. Other forms of fossil fuels include petroleum and coal.

Only 8% of total US energy consumption presently comes from renewable energy sources such as hydropower, biomass, ethanol, biodiesel, wind, solar and geothermal. Thus, natural gas energy is vital to the US economy and its consumers.

Skip to: What is Natural Gas and How is it Formed?

What is Natural Gas and How is it Formed?

Natural gas occurs naturally and is often found mixed with other hydrocarbons such as coal. It is mostly methane and contains by-products of propane and butane. These by-products are removed and cleaned from the gas at the processing plant and serve well for their own uses.

These fossil fuels are slow to form taking millions of years. This process involves the decaying of the remains of living plants and animals that have died. As sand and silt cover the remains, more organic material is added on top followed by more sand and silt with the process repeating itself over and over. As the pressure, and heat, of the overlying layers build, the sand and silt eventually turn to rock.

Because natural gas is odorless and colorless, leaks cannot be detected by humans. Therefore, mercaptan (a smelly chemical) is added to the gas to make is smell like rotten eggs.

Natural gas drilling has dramatically increased since 2009 because of the Marcellus Shale reserves in Pennsylvania. It is estimated that current production in W. Virginia and Pennsylvania now exceeds the average production of 2004-2008 by as much as five times, averaging almost 4 billion cubic feet per day. 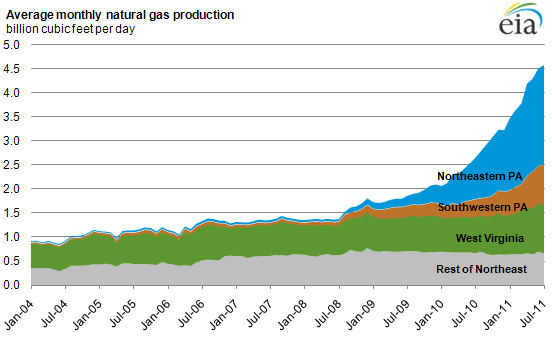 In its raw form, gas is usually considered "wet". This means that it contains liquid hydrocarbons and nonhydrocarbon gases. These hydrocarbons are frequently removed at or near the well site or a processing plant. It is then considered "dry" and is consumer grade.

It can also be used as a fuel for vehicles. To be employed as a vehicle fuel, natural gas can be used either in its compressed form (compressed natural gas, or CNG) or in its liquid form (liquified natural gas).

The use of directional drilling applications combined with fracking has opened up vast natural gas reserves that were once not economically feasible to explore. Just because an area has an oil or natural gas reserve does not mean it's accessible. For example, perhaps the rock can't be crushed at a fast enough rate or the reserve is beneath a mountain.

For these reasons, innovative companies have spent huge sums of money on research and development to come up with solutions to these problems to make natural gas drilling more economically feasible.

*The invention and perfection of the MWD (Measurement While Drilling) tool means that drillers don't have to stop drilling to take time-consuming measurements.

Probably the greatest advantage to directional drilling is the ability to reach otherwise unreachable reserves, but there are other advantages as well:

1. More than one well can be drilled on a pad, resulting in fewer rig moves resulting in less surface area disturbance.

2. Relief wells can be drilled from a safe distance.

3. Increased exposure to oil and gas reserves because the borehole lies horizontally, rather than vertically, to the hydrocarbon.

Disadvantages: One major disadvantage to directional drilling is the increase in oil and gas theft. For instance, in 1990, Iraq accused Kuwait of stealing its oil through horizontal drilling.

Because these natural gas reserves are trapped in shale, extraction has proven difficult at best. Although shale is easily broken, because it was formed through sedimentary processes, the bedding planes are very compact with no pore space for water to permeate through. The compression process needed to create the sedimentary rock itself makes shale molecules tightly spaced.

The boost in natural gas drilling has been a result of new technologies in directional, or horizontal drilling, combined with hydraulic fracking. This combination has proven to be enormously beneficial to producers of natural gas and oil because shale can hold enormous reserves.

Fracking is a process that is done after the initial drilling of the well. In the fracking process, sand is usually mixed with water and injected into the formation at high pressures. This process creates cracks, or fissures, that the petroleum or natural gas can seep through. 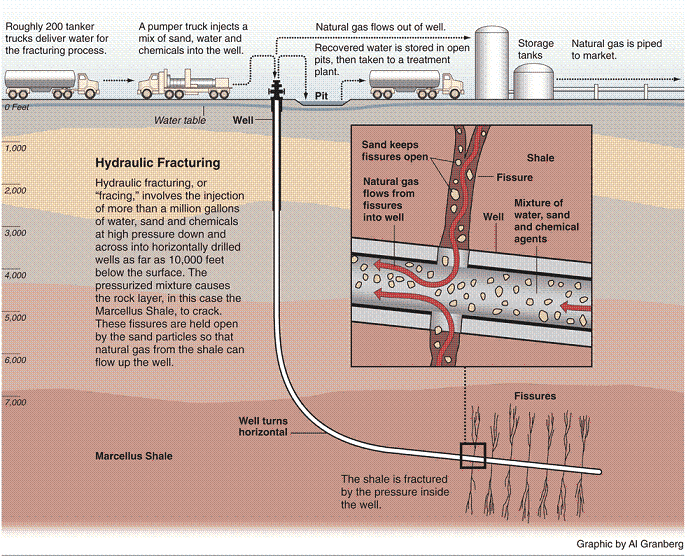 Based on these current numbers, American can produce enough natural gas energy to power American for over 100 years. For this reason, natural gas drilling seems to have a pleasant future.

However, natural gas drilling and fracking isn't without its problems. For instance, each fracked well requires over 1,000,000 gallons of water. In the US alone, 35,000 wells each year are fracked. This process alone requires a vast amount of an even more important resource - water.

To further complicate the problem, all of the water used in fracking now becomes wastewater and must be properly disposed. This water has to be treated before disposal or reuse. It is wastewater because about .5% of the fracking solution is chemicals - potentially harmful chemicals. If released into the environment, these chemicals could pose various threats to humans and the environment alike. For this reason, many environmental groups oppose natural gas drilling and fracking. 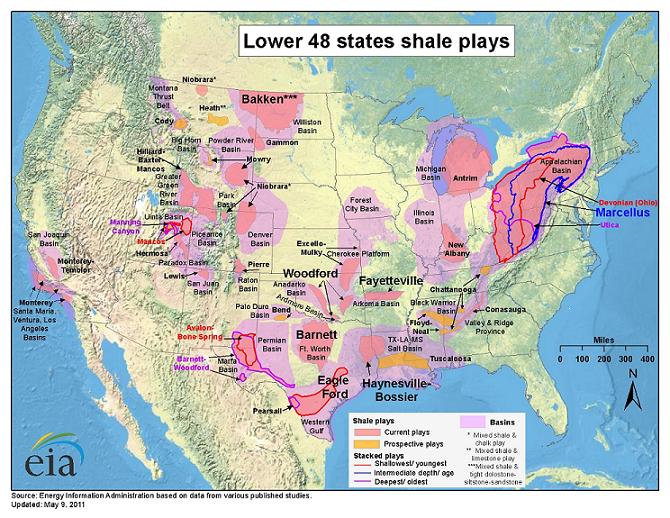 The boom in natural gas drilling over the past few years is because natural gas energy has so many uses.

Residential Typical uses for gas in the home is heating and cooling, not to mention the variety of appliances it can power. Such appliances are: space heaters, clothes dryers, pool and jacuzzi heaters, fireplaces and barbecue grills, outdoor lights. These appliances cost more than their electrical counterpart but last longer and require less maintenance.

A new development for the residential market is distributed generation. Although this technology is still in the beginning stages, it offers the promise of independence from electric companies. Via distributed generation, natural gas fuel cells and microturbines generate electricity from natural gas. The system is connected directly to the natural gas line running in to the consumer's home and generates just the amount of electricity needed.

Because the electricity transmitted through power lines has a lot of waste, distributed generation will mean lower overall costs to the consumer and result in higher energy efficiency. This technology should prove well for the environment as well because coal-fired power plants pollute the environment. Although coal is the cheapest fossil fuel, it's also the dirtiest. Industrial Uses Above and beyond what we normally think of uses for natural gas, a plethora of other products use it as well. For instance, natural gas provides the base ingredient for products such as plastics, anti-freeze, fabrics and fertilizer. For this reason, industry consumes more natural gas than any other sector and accounts for 43% of natural gas use. However, this usage is concentrated within a few sectors that include the pulp and paper, metals, chemicals, petroleum refining, stone, clay and glass, plastic, and food processing industries.

Natural Gas in the Transportation Sector The most exciting development is natural gas vehicles (NGV). Although the gas has been used since the 1930's to fuel vehicles, lack of refueling infrastructure, high initial cost and vehicle performance issues have prohibited natural gas cars from dominating the scene. As the push for green energy becomes stronger, natural gas cars will soon dominate the roadways.

As more natural gas cars are seen on the highways and more fuel cells are found in people's home and businesses, the hunger and need for natural gas will grow. This increased consumption will spur more natural gas drilling. This will in turn demand more technology and innovations from rock bit manufacturers, directional drilling companies and fracking companies. These companies in turn will demand better products for their suppliers. The giant wheel of business and technology will only continue to turn and bring with it jobs and lower costs to consumers.