Although not a direct result of offshore oil drilling, the Exxon Valdez oil spill is now the second largest on record. This oil spill occurred in Prince William Sound, Alaska, on March 24, 1989.

In 1992, herring and pin salmon populations showed a dramatic decline. This decline continued until 1995. The population decline affected so many fishermen that, in 1993, a group of fishermen blockaded all oil tanker traffic to and from the Valdez oil terminal. This blockade lasted for three days. 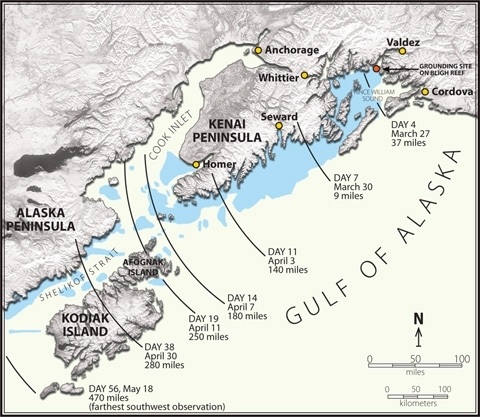 Map of the extent of the Exxon Valdez Oil Spill

According to a New York Times 2009 article, federal researchers estimate 16,000 gallons of oil remain buried in areas hit hardest by the oil spill.

In addition to herring, sea otters, killer whales and clams are still considered "recovering" for the environmental disaster.

In 2003, studies showed that some beaches in Prince William Sound were still feeling the effects of the oil spill and wouldn't experience recovery for another 30 years.

What happened to cause such an environmental disaster?

The  oil tanker was headed for Long Beach, CA, when it struck Bligh Reef. The captain, Joseph Hazelwood, had been reportedly drinking just prior to the ship sailing.

The final guilty verdict spread the blame around a bit. At fault was human error, including lack of sleep for crewmembers, and faulty equipment that Exxon deemed too expensive to fix.

Because of disasters such as this one and the British Petroleum Deepwater Horizon spill, many environment groups, like Greenpeace, advocate the use of alternative energy, or renewable energy sources and oppose offshore oil drilling as well as the use of tar sands and oil shale.

However, these solutions are not without their own set of problems.