Deepwater Horizon and the Gulf of Mexico

The explosion on and subsequent sinking of the Deepwater Horizon on April 20, 2010, caused a firestorm of political and public opinion.

The offshore drilling rig was owned by Transocean and leased to British Petroleum in the Gulf of Mexico.

The following video of the oil rig fire in the Gulf of Mexico was provided courtesy of the US Coast Guard.

President Obama's decision polarized an already divided country that was deep in recession. While environmentalists favored the moratorium, working class citizens directly affected by the oil spill did not. 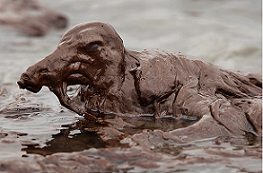 However, working class citizens weren't the only victims of the BP oil spill, as the picture to the right demonstrates.

According to Earth Justice, the British Petroleum oil spill continues to smother coral formation, infect the food chain, layer the ocean floor with tarry deposits, and affect life forms in ways that can only be estimated.

If these claims are true, our oceans could be in danger.

Is there any other oil spill in US history that we can compare this oil spill to and draw logical conclusions from?

There certainly is - the Exxon Valdez oil spill.