Button bits are still a mining and drilling tool used in hard rock drilling even though the PDC drill bit has taken over more than half the market share of total footage drilled. 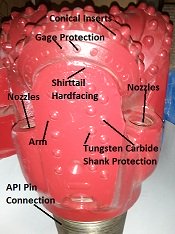 Even though the PDC bit is wildly popular, tricone bits aren't so easily pushed aside.

For instance, PDC bits currently do not drill gravels, dolomite, and hard limestone very well, if at all.  It seems that the need for tricones will continue for a while.

Since the important gusher at Spindletop and the invention of the bi-cone bit by Howard Hughes, Sr.,  roller cones have played an important role in mining and drilling.

Roller cones have rotating cones that contain tungsten carbide inserts. Tricone, or three cone bits, are the most common; however, two cone and one cone bits are also manufactured but aren't used very often.

Chisel inserts are more aggressive than conical, and some designs employ a mixture of both.

Conical inserts are more domed in appearance and are used to grind formations that are more abrasive and are higher in compressive strength.

Tungsten carbide inserts are individually manufactured and then press fit into pre-drilled holes in the cone of the bit.

Although tungsten carbide inserts are the mainstay of roller cones, pdc cutters and their use in pdc bits are fast replacing them.

All rock drill bits require some type of fluid circulation. Drilling fluid may consist of water or oil, air, or foam. The circulation of drilling fluid serves several purposes:

*Clears away cuttings so new geological formations can be drilled

*Cleans and cools the bit

Return from Button Bits to Types of Drill Bits